Mother’s Day is always a little bit sad for me because my mom isn’t here. I especially hurt for my kids who don’t have the privilege of having a living grandmother. However, her absence is what drives me to try to be the very best mom for her grandsons that I can be. 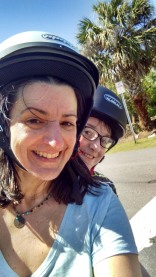 One way I do that is by encouraging them to be bold and say yes to things that might be a little bit scary and out of their comfort zone. My youngest son is a theater geek and one of the sayings that they use in his acting classes is, “Say yes and see what happens.” Especially when doing improvisation, saying “no” stops the action and kills a scene, but a “yes” is full of possibilities.

Some of my best memories of my mother where times when she did something out of the ordinary, like the time she and a friend (the mother of my best friend) showed up at our school and checked us out unannounced. We both arrived at the front office wondering why we’d been called out of class only to see her mother pull up in her little silver Honda Civic with my mother riding shotgun. They took us on a little impromptu road trip, which I can almost guarantee wasn’t my mother’s idea. Spontaneity was not something that came natural to her, but she admired it in others.

Last month we spent a few days in Isle of Palms, South Carolina. My 12 year old and I had a morning to ourselves while the others went fishing. What did we do? We rented a moped and explored the island. We even buzzed over to Sullivan’s Island. As we pulled out of the parking lot, my son yelled, “This is kind of scary!” I said, “Yeah, but it’s kind of fun too, isn’t it?” He shouted, “Yes!” I could almost hear my mother saying, Look at them go!

This year I’ve decided to take SCUBA lessons with my oldest son. He’s been asking to do it for a year or more and I’ve put it off because it’s something I’m not particularly eager to do. He knows this, which is all the more reason for me to do it.

I’m going to say yes and see what happens.